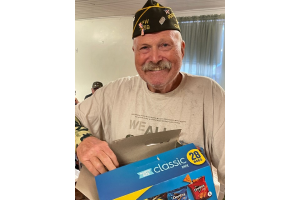 The event was held at the Hillstown Grange in East Hartford, and ran from 6 until 8 PM. The weather was perfect and good time was had by all.

All Veterans of the US Armed Forces, as well as the general public, were invited to the free end of summer cookout. Hot dogs, hamburgers, salads, desserts and refreshments were served.

This was a great opportunity for Veterans to meet, socialize and enjoy a dinner with comrades who have all answered the call to serve their Nation.  Spouses, caregivers, and significant others also attended.

In addition we had some notable visitors, including East Hartford Mayor Michael P. Walsh, known to all as "Mayor Mike." The Mayor has given strong support to Veterans since taking office. Restarting East Hartford's Memorial Day parade, the first in six years, was a huge effort, but it all went off without a hitch. Mayor Mike has also joined us at Center Cemetery on Main Street to place flags at the gravesites of Veterans all the way back to the American Revolution. The Mayor gave a short speech, stating some of his plans for the future of East Hartford.
Also present was Matt Harper, a candidate for election to the 3rd District State Senate seat.
A Gramma's cream pie was presented to the oldest Veteran in attendance, James Shelmerdine. The pie was presented to him by the Mayor.
Following the picnic clean-up, a presentation on Veteran's addiction and suicide prevention was giving by Kyle Forrest. Such an important topic and we only had 4 people in attendance.  This presentation will be posted on our Facebook and Web site soon.
Some photos are posted in the Gallery section of this site. The link called "2022_Grange_Picnic" contains five captioned photos. For all available photos--79 of them--look in "VFW-SOS_End of Summer Picnic-2022."